Malka's Angry Boyfriend was a former Superuniverse Top 10 character, based off of the vitriolic nature of a letter addressed to premier Florida wrestling photographer Brian Berkowitz in October 1979 about him and wrestler Steve Keirn getting too friendly with his "girl" Malka.

The following was transcribed from the letter as described in Episode 79:

You and Steve Keirn are to lay off my girl Malka Rabinowitz NOW! Malka depends on me for her living expenses. The cushy airline job doesn’t pay her enough to buy a decent coat. I found your names in her address book. I have persuaded her to confess. She told me how you were helping her to get a meeting with that no good peroxide blonde fairy Steve Keirn.

If he pays her rent, he can meet her any time, but since I have a lease on her favors, he either jump himself or go molest a blind kid, which is probably what he does!

Malka is only looking for a cheap thrill – she don’t care about either of you two homos! Let’s face it: nobody really cares about wrestlers, hell, they’re cheap thrills. A three dollar ticket can get any drunk or hooker in to see them strut half naked. Even the blood is fake to scare old ladies and dumb kids!

Wrestlers think they’re so super – well, they’re not! They’re just a bunch of chumps who get beaten to entertain lower class criminals. I tell you, if they’d have any brains, they wouldn’t be in such a stupid profession. Who cares about them? Who cares if they bleed or die?

You ever notice the kind of dirt that go to wrestling? Not one decent person in the entire arena. All you see are ugly fat deformed women and unemployed pimps. Half the goons that watch wrestling can’t be shown in public! I ain’t never seen a girl at wrestling that dressed decent.

If you – and especially that ape Steve Keirn – don’t leave my Malka alone, I’m gonna punch both of you from here to eternity! I know who you are, Brian. You’re the kid with the big nose that blocks everyone’s way with your camera. I’ve done my own investigating when it comes to you – I’m not a person with no connections.

As for Steve, I challenge that evil punk to a tape-fist match! I’ll even pay the chumpy chicken to face me. He may be great in fixed matches, but let the real man – ME – emerge in a real match. You two better not think these are idle threats from a stupid fan, because I am not a fan of wrestling. I’m a guy whose going to keep his girl no matter what!

I doubt Malka can even write you again. If she does, you are to tear up her letters. If she approaches you – slap her! I think Malka would have the good sense to know a man from a bug. She knows that worm Keirn can never afford her, he doesn’t make that much money! Besides, he can’t handle a real woman. He probably has these half-wit (n word) teeny-boppers running after him and that harpooned walrus, Rhodes.

I’ll tell you, no decent woman would ever care for him once they knew the impotent jelly he really is. He’s just an overgrown retarded ape.

Malka has moved, don’t even think of selling your cheap shots by mail!

Total appearances in the Superuniverse Top 10: 0 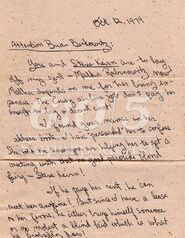 Page 1 of the letter - Copyright of Arcadian Vanguard 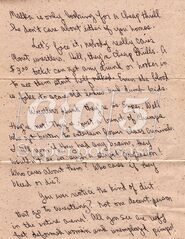 Part 2 of the letter - Copyright of Arcadian Vanguard 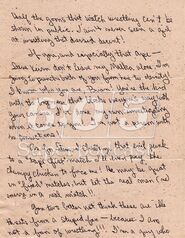 Part 3 of the letter- Copyright of Arcadian Vanguard 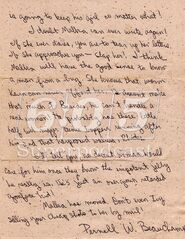 Part 4 of the letter - Copyright by Arcadian Vanguard
Community content is available under CC-BY-SA unless otherwise noted.
Advertisement